We are Christ-followers who have been saved by God's grace, and are now the righteousness of God in Christ.

In our love, God be lifted high.

Hello! We are Natz Fetil and Meki Carolino-Fetil. Our goal as a couple is that through our being together, we would be able to point people to Jesus, and showcase the Gospel. This is what it means to redefine being “us”. 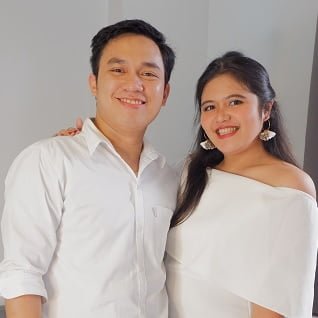 Our Story is His Story

2015 – Natz and Meki got acquainted in some way during a Christmas event for singles in their church denomination. They became Facebook friends with Natz even posting a “Thank you, Ate Melody!” on Meki’s wall. [Ate is what you’d call someone older for respect.]

They honestly did not even make an effort to get to know each other after that. It was just a one-off meeting and they “couldn’t care less”.

August 2017 – Natz and Meki became friends through their denomination’s singles retreat in Baguio. Meki was an organizer and Natz was an attendee. They had some good, deep talks and funny banters. After the trip, they had an ‘episode’ since Meki got hurt upon finding out that Natz had a crush on her sister. She thought that Natz was ‘using’ her. Natz claims to this day that he befriended Meki in Baguio genuinely and as he found her as a potential ministry partner.

September 2017 to August 2018 – After that hiccup in their friendship, they started to become good friends. Nothing but platonic, despite everyone else teasing them that they had chemistry. They’d attend group eat-outs and find themselves naturally drawn to talk to each other. Meki would call Natz up every now and then for ministry woes and lovelife problems. Natz would tease Meki about random things and scold her for her bad decisions. They both acknowledged that they had a special connection, but they’d say that it was just good friendship. Everyone would tease that they were ‘bagay’ but the two would just brush it off as Meki knew about Natz’s crush, and Natz knew about Meki’s guy at that time.

Looking back though, Natz says that even during this time, there was a nudge in his heart that Meki was probably the one. Meki, on the other hand, felt in her heart as well (and even told her friends) that even though she was seeing another guy at that time, she felt like she was going to marry Natz.

September 2018 – Natz started to show hints that he liked Meki. But Meki had her guards up. They eventually decided to pray for one another and the direction they should go.

October 2018 – After a lengthy talk while on a ministry trip, they decided that they were going to explore courtship. Natz got Meki’s mom’s blessing (a first for their family) and officially started this new season with Meki.

Committing to Each Other

January 2019 – Meki gave Natz her YES and agreed to be in a committed relationship.

The entire 2019 – So many joys and tears — their sanctification and pruning season!

December 25, 2019 – Natz asked Meki to marry him. Her response was very apt with their being a very straightforward and down-to-eatrth couple: SYEMPRE [OF COURSE].

They are now in the process of being sanctified as individuals, and they are seeking to give God the glory through their marriage.

How can we help?

Just like Max Goodwin (from New Amsterdam), we’re looking forward to help you. Here are some ways that we can be of service.

Got a concern or issue with your life or relationships? We’re here to help you with your thought process and share some words of advice.

We are also open to invitations to speak in your church, youth or young pro events. Topics can be on faith & the Gospel, singlehood, relationships, or life tips.

Before you go for coaching or counselling, let’s make sure to cover the basics.

Ready To Transform Your Life and Your Relationship?

This is the first step!